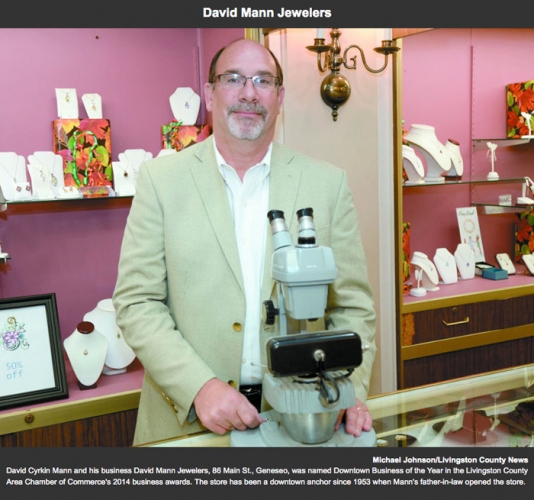 “The idea of walking in a jewelry store can be intimidating. We try to make it as un-intimidating as possible,” Mann said during a recent afternoon interview.

That’s not to say that Mann has not given thought to spending the thousands it would cost to update the displays. He has, but he has also ultimately decided that’s not what attracts customers to the store, which celebrated its 60th anniversary in 2013 and last month was named Downtown Business of the Year by the Livingston County Area Chamber of Commerce.

“We’re a throwback to the old days. There’s very few independent mom and pop stores left in this country,” said Mann, who got engaged in the store with his future in-laws looking on. “We sell to generations. It started with my father-in-law.”

And it continues. With customers coming in to purchase jewelry, get pieces repaired, or help replacing a watch battery in their Timex with the tricky back that needs a jeweler’s special tool to pop back in place. The customers — the couple with the watch battery, for example, on recent Friday afternoon — chide Mann about their visits and past purchases, and the owner responds with his own self-deprecating jokes.

“The contact with customers is the best part. People come in just to tell a joke, or they come back from a vacation and stop to say they met a friend of mine or someone who knows me from wherever they had gone,” Mann said. “This business is fun, and it should be fun.”

The Mann family’s jewelry legacy goes back nine generations, beginning in Toronto in 1919 when Jack Mann opened for business, offering jewelry and watchmaking services. Jack’s son, Harold, moved the store to Geneseo in 1953 where is has been a downtown anchor ever since.

“Sometimes that goes unrecognized, sometimes that goes unnoticed when somebody has been there so long. You can’t lose sight of what it means to have an anchor business like that on your main street or in your downtown area,” Chamber President and CEOLaura Lane said.

Cyrkin Mann was working in the food industry in Rochester when his father-in-law, Harold Mann, decided to retire and asked Cyrkin Mann if he was interested in buying the store. Harold’s daughter, Denise, and Cyrkin Mann took over the business in 1989.

“I didn’t have any experience in business, no retail experience. But I saw an opportunity,” said David Cyrkin Mann, who got a loan from the Small Business Administration and loans from friends, then worked alongside his father-in-law for six months to learn the business.

“It probably took 10 years to get it, to understand the business, the jewelry business and its unique characteristics,” Mann said.

“Doing business in a town like this keeps you young, or at least thinking young,” said Mann, 58. “I don’t think this is work yet. I love coming to work every day. It’s different each day, and we meet new people and make them happy.”

The store sells a variety of jewelry — diamonds, of course, and gold and silver pieces — in the form of rings, pendants, bracelets, earrings and charms. The store, with about a half-dozen employees, also provides services such as repairs and custom design.

The store is a member of the Independent Jewelers Organization, an association of about 850 stores in the United States and Canada that sets standards for its members, hosts two industry shows a year, provides buying group resources and opportunities for members to compare notes about trends and other ideas.

Mann said the Internet has presented the biggest challenge to his business, and the rising cost of gold in recent years led Mann to adjust his inventory to include more silver pieces. He’s unfazed by the pending arrival of a new jewelry chain coming to Genesee Valley Plaza.

“I’m not a big fan of chain stores. I think when you have an owner with the business, people see that you have a very vested interest in it,” said Mann, who often sends personal notes to customers and includes his picture in advertisements.

“I can talk about farming, crops and horses. Hunters bring in packages of meat to me and say try this,” said Mann.

“It’s a fun business to be in,” he said. “I don’t know many businesses where people come in and leave with a smile on their face.”