Close cooperation between an alert shop proprietor, the Livingston County Sheriff’s Office and the Village of Dansville Police Department has led to the arrest of two young men from Dansville.

The involvement of Geneseo jeweler David Cyrkin Mann was pivotal in apprehending the suspects, Devon Sullivan and a 17-year-old male, who have local court appearances to answer charges of burglary and grand larceny. Sullivan, 20, and the teen are alleged to have stolen jewelry, including a diamond ring valued at $10,000, from Sullivan's mother's jewelry box.

The young person showed Mann two impressive rings, one with a very large diamond and the other a sapphire-diamond.

“As soon as he walked in I knew something was up,” Mann said. “I don’t mean to pre-judge people, but if you do this long enough, you just know when someone shouldn’t belong to certain pieces. He was a clean-cut kid, but still I sensed something was wrong.”

Mann smelled stolen goods. He asked the seller how he had come into possession of the rings.

Mann was told the rings came from Germany, but when the seller didn’t seem able to supply specific details of location, Mann became all-but-sure he was being asked to buy stolen items.

If his suspicions were correct, Mann realized he would need some time to closely examine the rings.

“I told him I was interested, but I wouldn’t have time to look at them right now,” Mann recalled.

“Would you leave them with me for 24 hours and I’ll evaluate them and let you know tomorrow?” Mann asked.

The young person initially hesitated, but then agreed, leaving Mann his name, his Dansville address and phone number. Mann supplied the seller with a receipt describing the two rings.

“One of them — the sapphire and diamond — seemed very familiar to me, like I had sold it or worked on it sometime in the past,” Mann said.

As soon as the young person departed, Mann called the Livingston County Sheriff’s Office. Sgt. Michael Dougherty came to the shop to take a report and photographs of the goods. With the Dansville address as a clue, Dougherty emailed the photos to Dansville Police Officer Shannon Griese, asking if Dansville had any open burglary cases involving stolen rings.

There was indeed such a case. Officer Griese showed the photos to the victim, who immediately identified the rings as among items which had been stolen from her.

With the suspect’s name and address supplied by Mann, he was approached and interviewed that same evening — and admitted that he, with an accomplice, had broken into the house and stolen the jewelry.

The rings were passed along to Dansville Police Chief Charles Perkins as evidence against the suspects, who were arrested on charges of burglary and grand larceny — all within 4 hours of Mann making his report to the Sheriff’s Office.

Mann’s hunch that he had seen and worked on the sapphire-diamond ring before was right.

The husband and wife who were victims of the crime had been Mann’s customers. When they learned of Mann’s role in bringing the culprits to justice, they visited the shop to express their appreciation.

“They got their pieces back and then came in to thank me,” Mann said. “She gave me a big hug and cookies. These were indeed people I had done business with before and one of the items I sold to them was the sapphire-diamond ring.”

Unfortunately, other jewelry items worth thousands of dollars probably cannot be recovered. Mann was informed that the other pieces had been sold to dealers in stores in Rochester and Dansville and had been passed along to secondary buyers with no records kept.

Mann might have done the same thing, reselling the rings without recording the purchaser or sale.

“But I didn’t feel comfortable doing that,” he said. “There is a right thing and a wrong thing.

“You do the right thing and you sleep every night like a baby,” he philosophized.

One week later, Dougherty returned to the shop with a letter of commendation, a pin, and a written certificate of appreciation from then-Sheriff John York.

“A lot of jewelers don’t ask questions. Not many would have done what David did,” Dougherty said.

“I give Dave Cyrkin a lot of credit,” he said. “Here in Livingston County we don’t have pawn shops and the kinds of business that tend to get stolen items. Still, when someone, instead of taking advantage of the situation and making a quick buck, has the wherewithal to report his suspicions to law enforcement, that is highly commendable.” 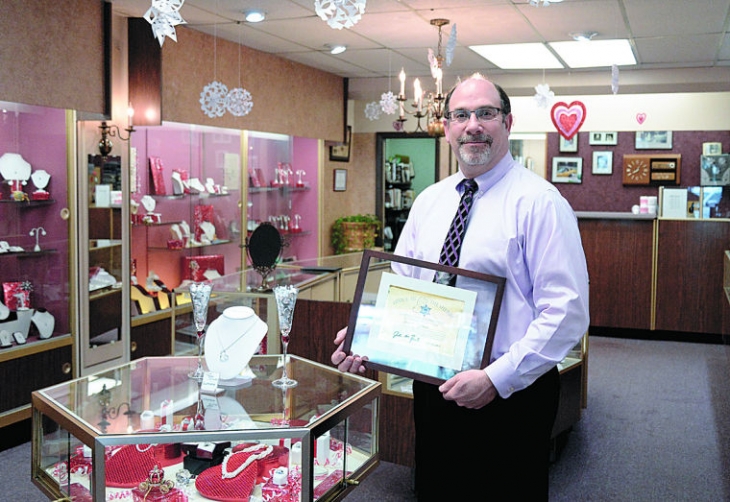